Given that the last two recipes I’ve posted have involved a little more work (granted, with a delicious payoff), this week’s recipe is a breeze that’s easy to throw together for a quick pre- or post-sesh treat.

I don’t think I’m pushing the envelope by positing that Caswell Berry is one of the sickest skateboarders alive.  If his opening line in Enjoi’s United Nations isn’t proof enough of his effortless destruction, then consider the fact he’s been manufacturing brain melters for nigh unto two decades—always with sick music accompanying his ripping—and has yet to slow down or otherwise succumb to the ravages of age.  I first saw him skate in his Wheels of Fortune part in 411VM Issue 46 (perfectly scored by Atmosphere, who, while we’re on the topic, is criminally underused in skate videos), but that was only the beginning of a 16+ year warpath resulting in classics like Man Down, Bag of Suck (his second best song, perhaps?) and Feed the Need.

If you’re familiar with Caswell’s modus operandi (other than generally killing sizable gaps and rails), then you can expect to see him do at least one of two things in any given video part: (1) focus his board with his ass; and/or (2) late shove a gap or stair set that would induce vertigo in the normal human.

For a while, I considered putting together a recipe for homemade veggie dogs as a vegan-ized homage to the hotdog imagery in his latest part, but alas, Salad Grinds and Bean Plants has already posted a recipe for homemade chili dogs, and his last name presents a pun too tempting to pass up, as recognized in the title sequence of his shared part with Blue Turner in Oververt.  Further, if you’re looking to cultivate joints (or board-focusing buns) of steel that’ll give you a decades long career of killing almost any terrain, then it makes much more sense to post a recipe full of natural inflammation fighters: enter the Caswell (Blue)Berry Smoothie, an inflammation-busting recipe inspired by the skater who has “never had a haircut in [his] entire life.”

This smoothie is a fruity and nutty blend of blueberries, mango, ginger, turmeric and almond butter that will ease your joints while tickling your taste buds.  While it’s well known among skateboarders that turmeric (which apparently can be pronounced either “TOO-meric or ter-meric) is a great herb for reducing inflammation, there aren’t many recipes that throw this into anything other than potato dishes and random hashes.  Thankfully, turmeric blends well with other inflammation fighters like blueberry, ginger and almonds. 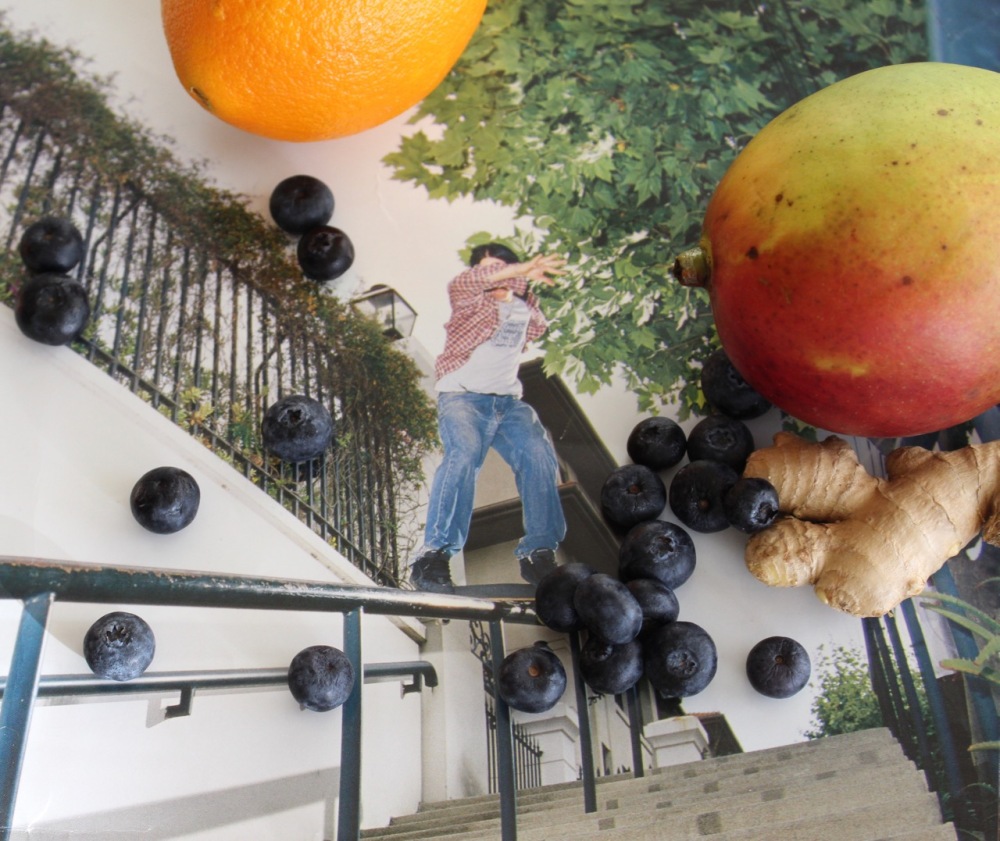 If you’re looking at this and wondering why anyone would ever blend blueberries, mango, orange, ginger and turmeric with a taste like almond butter, just trust me.  Nobody seems to mind seeing these fruits mixed with nuts in a dried fruit and nut bar, so I think you’ll be pleasantly surprised when these flavors mix in smoothie form (I’ve been told it’s somewhat reminiscent of those holiday-themed chocolate oranges, despite there being no chocolate in it).

Another note on the ingredients: while I typically avoid frozen pre-packaged meals, as they are paragons of excess sodium and other preservatives, individual frozen foods like blueberries, spinach and other veggies and fruits (without preservatives or any prior baking) are often almost as nutritious as their unfrozen counterparts—all this is to say that when you see frozen blueberries in the ingredients list, just note that you’re still getting the benefits of fresh blueberries, but in a more convenient, smoothie-friendly package.