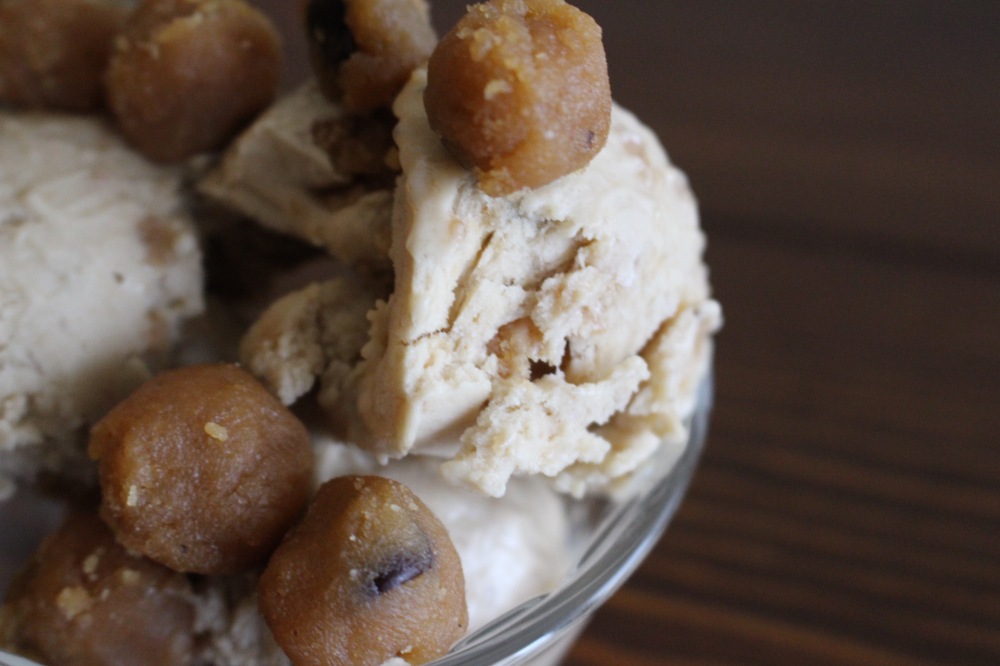 Despite all of the roles that skate shops fill—safe havens for skateboarders, suppliers of fresh product, organizers of local events, hubs of progression for skaters in a given scene—only a select few of them enjoy any kind of notable longevity.  With the exception of a few perennial institutions, it seems that they are as quick to close their doors as they are to open them.  Please don’t mistake that as judgment; I can’t imagine how difficult it is to keep a brick and mortar shop running when online retailers and mall chains threaten to kill skateboarding by sacrificing all of the benefits that come with a physical shop for the convenience of clicking a button on your phone while on the toilet (to be fair, lots of shops nowadays will also offer to ship stuff—I don’t mean to suggest that this in any way cheapens the sensation of actually walking into said shop; there’s a big difference between being an online behemoth and merely offering an online presence to help accommodate your constituency’s needs).

One has to marvel at how a skate shop must both adapt and remain unchanged to stay alive: on the one hand, those shops that have stood the test of time do so by maintaining a core image, an unwavering basis on which the locals pride themselves (and with good reason).  A shop is as much about a scene or an identity as it is about providing product. On the other hand, the shop has to shift and adapt to changing trends.  It wouldn’t make sense for a shop to stay stuck in the days of, say, Photosynthesis (although, let’s be honest, how rad would that be?).  From my perspective (note: I have never owned a skate shop and am sure I would tank one with alarming speed if ever given the reins), it appears to be a delicate balancing act and I applaud any shop that can pull it off while simultaneously fostering a robust skate scene.

Unless you’ve lived under a rock (or otherwise don’t have access to the internet), you’ve heard that No Comply (Austin, Texas) just celebrated its tenth year in business in January.  If you haven’t had a chance to check their tenth anniversary video “Tenny,” check it out here.

In 2007, No Comply set up shop in Austin, Texas.  Its humble beginnings immediately evolved into a well-earned powerhouse following which quickly established the shop as the undisputed center of an Austin skate scene in the throes of rebirth.  Originally located on South 1st, No Comply relocated in 2008 to West 12th Street, where it both metaphorically and literally oversaw the construction of Austin’s world-renowned House Park.

In addition to being one of the primary pushes behind the construction of this paradise of a skatepark, No Comply has fully invested all of its resources in stoking and giving back to the Austin skate community.  Any given event or product No Comply produces inherently involves efforts from a variety of local artists, musicians, coordinators and skaters.  In their ten years, they’ve had no shortage of stunningly creative decks and sick events (ranging from art to music to video premiers and everything in between), not to mention a team that just keeps growing both in number and in jaw-dropping skill.

This presence is amplified by the shop’s humble demeanor (like that skater at the park that should be pro, but doesn’t act like a dick about it).  Walk into the shop and you’ll see walls expertly littered with a range of decks, shoes and clothes for skateboarders of any propensity. The guys at the shop are knowledgeable and humble and the nostalgic sense of truly feeling at home in a skate shop hits you as instantly as the (very welcome) A/C as soon as you walk in the door.  As an added bonus, part of the shop is set up as a coffee bar.  Seriously, there’s no better way to establish yourself as a true skate shop—a status which carries the implication that skaters are not just welcome to shop there, but to chill there, too—than having a sick coffee bar in your shop. 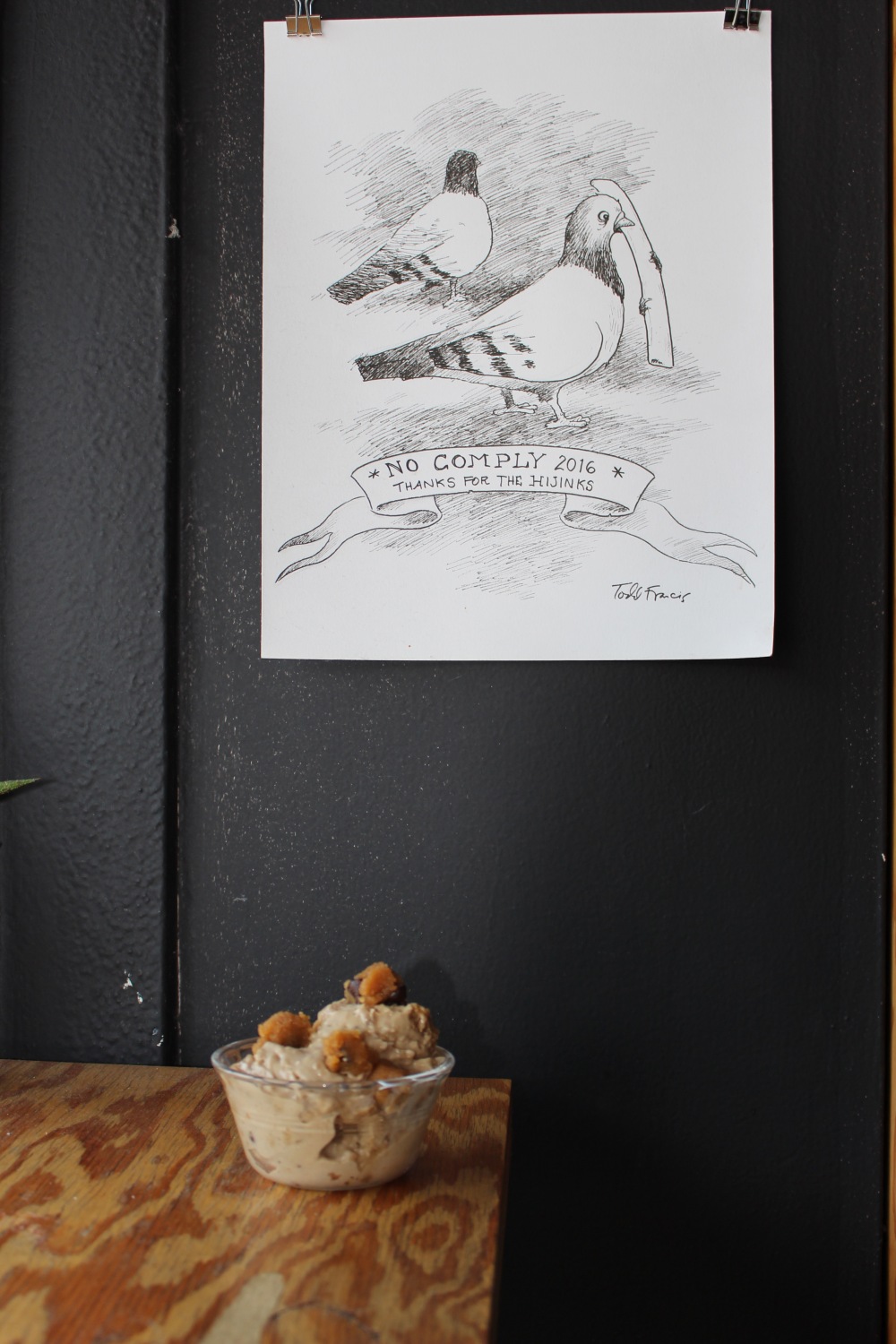 If you’re ever in Austin, whether skating or not, you’d be doing yourself a disservice by not stopping by No Comply and saying what’s up. With ten years under its belt, it’s not hard to expect that it will continue to be a Texas institution for many more decades.

As I mentioned before, No Comply is literally a one minute walk from House Park.  If you’ve ever skated House Park, you know what a sick park it is.  Pristine ledges for days, a super fun bowl and welcoming locals.  However, if you’ve skated House Park (or anywhere in Texas, really) you know what a beast the summer heat is.  That Texas sun doesn’t mess around, and if you’re like me, thirty minutes into the session, you’re downing water desperately and looking around for something to cool you off.

Here’s the rub: while ice cream is a great treat on a hot day, dairy during intense exercise is not always a great idea (given the complexity in the body’s digestion of dairy, it can cause cramps and stomach problems if you’re skating while downing ice cream).  Thankfully, however, there’s an easy non-dairy treat that tastes just like ice cream and will cool you off without the unfortunate side effects of an ice cream bar.  Much like skate shops that have endured the test of time, bananas are a great food that retain their core identity, while also being malleable enough to take on a number of flavors.  I’m certainly not the first person to discover the magic of frozen bananas (indeed, there are tons of similar recipes out there in the ether), but if you didn’t already know, when frozen and blended, bananas take on a very similar taste and consistency to freshly-churned ice cream.  Mix it in with a little bit of peanut butter and some homemade vegan cookie dough and there you have it: a perfect treat for a hot day of skating at House Park (and then, once you’ve cooled off, go say what’s up to the folks at No Comply). 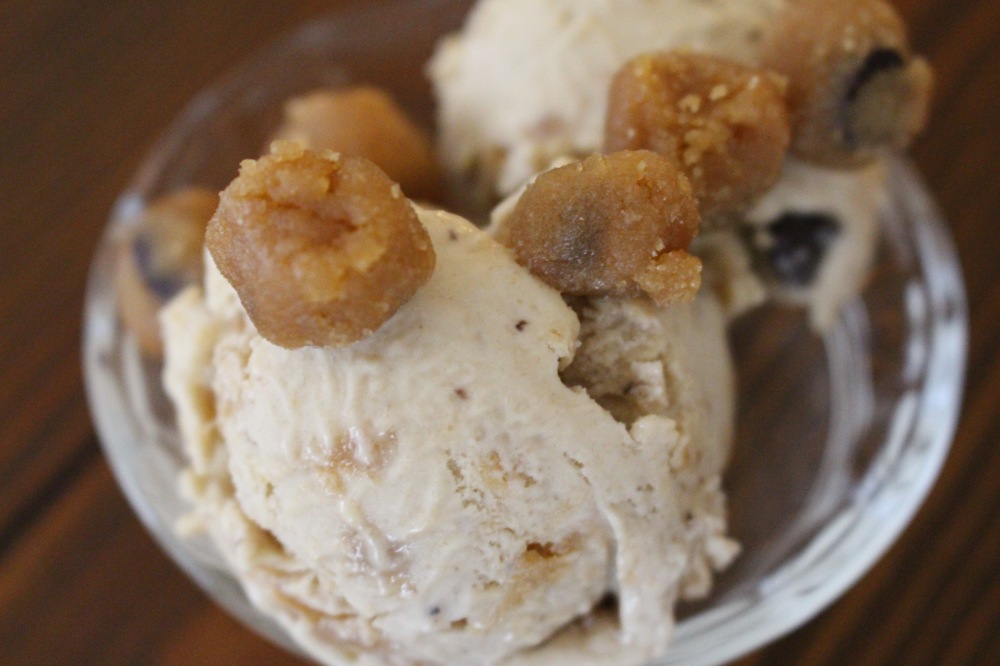 Note: This will stay good in the freezer for about a week; when using for later servings, take it out about 10-15 minutes before serving to let it thaw.